I come across a recurring theme that many customers are confused on the path to Automation and self service. I can also agree that the technology industry as a whole is making this even more confusing as no one wants to lose market share. For example if “Vendor A” solution does not play well or becomes irrelevant in the new proposed cloud automated architecture they will do everything in their power to slow progress. This post is not to say one way is better than the other or bash other vendors. My mission and reason for joining VMware was to help and guide customers to a fully automated self service data center. This is about much more than just tools and professional services. I do believe that VMware has the best virtualization platform and the best Professional services because I was a customer and relied on both for years. In reality this has little to do with technology at all anyway. The journey to cloud and self service and Automation is much more a culture and business process transformation. There is really no magic pill that will solve the problem more than process and standardization. I know what your thinking standardization = lock in. In some organizations that is true if very rigid processes align with the technology you use. However standards also increase reliability and a repeatable process results in higher quality and speed. Don’t just take my word for it, look at what some large customers have accomplished. (Continued reading below image) 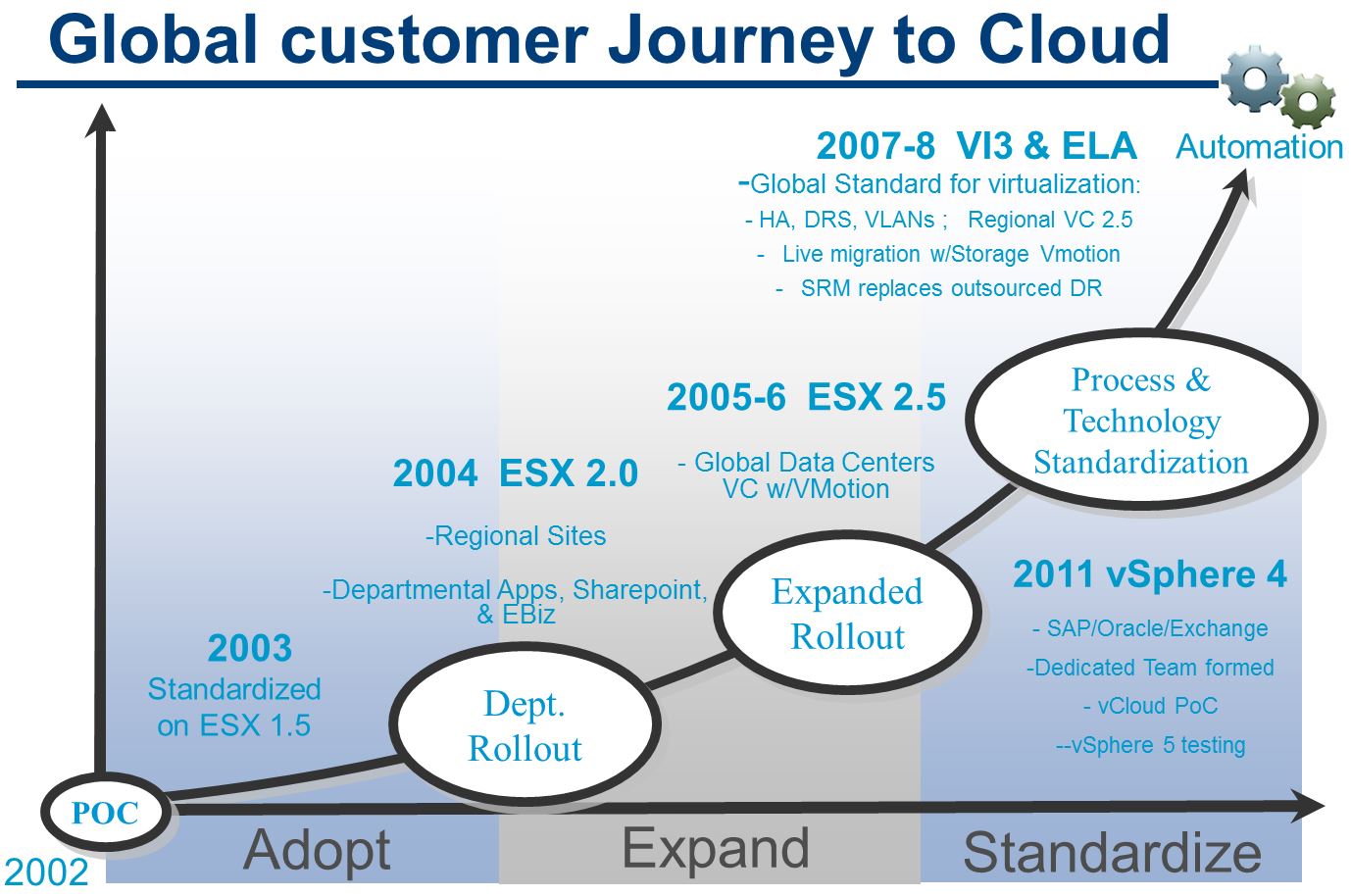 So where is the biggest problem in the path to automation? My experience even before working for VMware was with Physical server provisioning. It still amazes me that over 10 years after VMware introduced the Hypervisor, there ars still so many IT folks that don’t understand this. When I first heard about VMware in 2000 I was very skeptical and curious at the same time. It completely shattered everything I had come to know thus far. But, I was open minded and started to think about why anyone would want to do this. A few weeks later I was in the data center struggling to get a Compaq server up on the network and boot to Bart PE so I could get an image on it. I had to recompile the PE boot loader with the correct network driver. Then I got past that and the image I had did not have the correct drivers. Then after that I had to load all the vendor support software. Then of course we switched to DELL later that year and the headaches continued, then IBM then HP. Even when we had a process down for one vendor the drivers changed between models and even the same model would have different drivers. This virtualization thing was looking more and more compeling. I made it my mission to virtualize everything. This was obviously selffish act as it made my job easier and made me look like a hero. At the same time I also could see the bigger picture. Eventually we could automate everything as we had software control over every layer. When there is no need to physically touch hardware anymore the finish line to automation is in your sites.

I am not saying there won’t be bumps in the road. Many software vendors are not as friendly with licensing and support for virtualized platforms. I struggled with this too but I am here to tell you there are ways to work through all of them. There is also the performance or what I call the perception of performance issues. These are concerns I experience and was able to work through. The strategy for any customer should be to virtualize as much as possible. Adopting a virtualize first policy is a very effective way to increase virtualization rates. A virtualize first policy dictates that any new or replacement server be virtual unless there is a strong business reason not to. You will need to do some work to build your case against folks that argue a strong business reason. Inventory your virtual servers for all apps currently virtualized as well as research licensing and support policys. Use this to create an internal white list of virtualization ready. Physical servers are dying a slow death, let’s help end this insanity sooner than later.